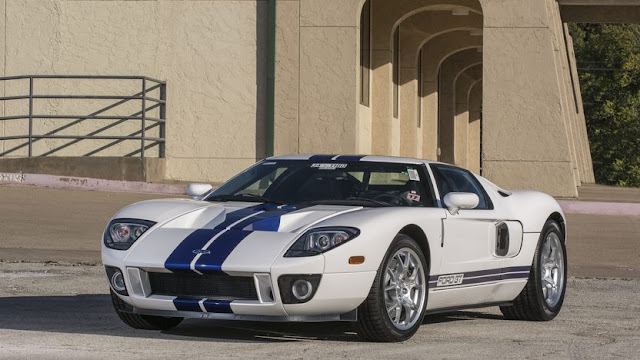 The Ford GT was the firm's birthday present to itself ... or, anyone with a spare $203,599 lying about! Created to mark the company's centenary, it was released in 2005. The new GT was inspired by one of the finest cars Ford had ever produced. The iconic GT40 racer was a multiple Sixties Le Mans winner. The new GT prototype débuted at the 2002 Detroit Auto Show. Feedback was fulsome! In short order, Ford confirmed that they would be putting the prototype into production. 4,038 GTs were built ... somewhat shy of the 4,500 Ford envisaged.

If the GT's styling harked back to the past, technologically, it was cutting edge. A venturi - cut into the floor-pan - provided plenty of downforce. High-speed grip was further enhanced by huge Goodyear Eagle tyres. And the GT needed every bit of that grip - as its 5.4-litre engine pushed traction to the limit. The aluminium V8 was fitted with a Lysholm supercharger. The cylinder-heads were well-fettled - including high-lift cams. When the Ford engineers finished, there was 550bhp on tap. Torque was massive - 0-60mph turning up in just 3.7s. The GT's body and space-frame chassis chipped in on the acceleration front, too - both being forged from light aluminium. Transferring torque to tarmac was independent, double-wishbone suspension.

Despite its power, this car was way more practical than its race predecessor. GT40 referenced height - all 40″ of it! The new GT was, at least, wider and longer. Performance-wise, too, the new car was more user-friendly. Those titanic torque stats translated to to-die-for acceleration. The GT, though, could mood-shift in an instant - cruising, seamlessly and effortlessly. A 6-speed transmission was there, if required. With the new GT, Ford had homed in on the ultimate all-rounder. To say the least, it took the sales fight to its rivals. A top speed of 204mph was more than competitive in supercar marketing terms. The Ford GT, then, was a nostalgia-laden celebration of speed!