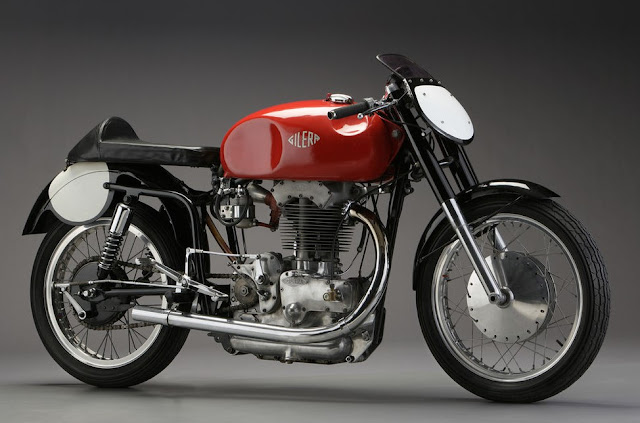 The Gilera Saturno was launched in '46. Its heyday, though, came in the '50s. In the fickle realm of motorbike manufacturing, Gilera was a big player in that fashionable decade. After that, the firm met with mixed fortunes. But - in the Fifties at least - the Saturno was a flagship for the Italian brand. It rolled into the showrooms in Sport, Touring and Competition guises. And immediately began to sell well.

The Saturno was a hit on both road and track. The production racer version was competitive for many seasons. Indeed, it remained so for some time after the bike's production run finished - at the fag-end of the '50s.

In roadster mode, too, the Saturno stayed tethered to the tarmac. That was largely thanks to its telescopic forks - and vertical rear shocks. It rapidly gained a reputation as a performance bike of its era. Towards the end, Gilera linked up with Piaggio and Vespa. It found a much-needed niche as part of the scooter scene. Illustrious though those names were - and are even now - for Gilera, its best days were gone. The Saturno, though, still shone a light for the glory years!