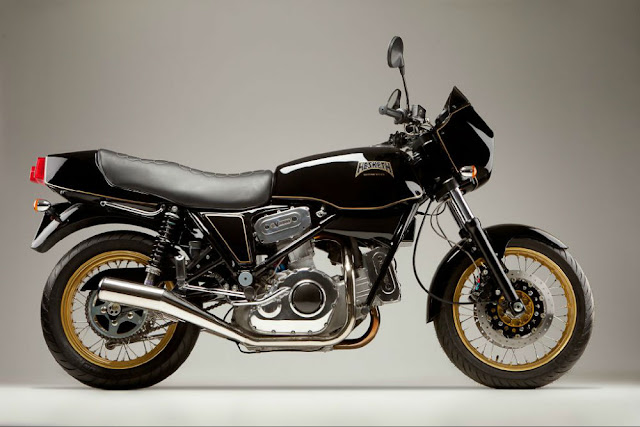 The Hesketh V1000 might be viewed as a mechanical folly. Was all the effort and expense worth it? Not from a financial viewpoint. Few of them sold. Then again, an architectural folly stands tall - boldly proclaiming itself a glorious failure. Perhaps the V1000 should do the same.

It was not as if the losses would hit Hesketh hard. After all, Lord Hesketh funded the F1 team which bore his name. Along with some sponsors, of course. Certainly, the noble lord did not lack for ambition. His goal with the V1000 was nought less than the resurrection of the British bike industry. And he almost succeeded ... up to a point. For, the V1000 was by no means a bad bike. It was stylish, for starters. And when it came to the cycle parts, everything was tickety-boo, too. The frame was made from nickel-plated steel tubing. Suspension was by Marzocchi. Disc brakes by Brembo. As you would expect, then, the V1000 handled and stopped with aplomb. So far, so good! Why, then, did the bike fail? Did it, perhaps, have an Achilles' heel?

Lord Hesketh's choice of engine designer could not be faulted. Weslake were at the top of their game. What they did not know about 4-strokes was not worth knowing. But, something went badly awry. When tested, the V-twin was noisy - and prone to leak oil. The gearbox was basic, at best. That said, the twin cam set-up, with four valves per pot, gave 86bhp - and did so smoothly. Top speed was a cool 120mph. So, things certainly were not all bad. Sadly, though, there were more than enough 'issues', to sow doubts in buyers' minds. Which was a shame. Because Lord Hesketh's vision for the V1000 could have led to a good British bike. Maybe even a great one. In true folly fashion, though, it finished up mere whimsy. The Hesketh V1000 promised so much - but delivered so little. Anyway - hats off to his Lordship for trying!