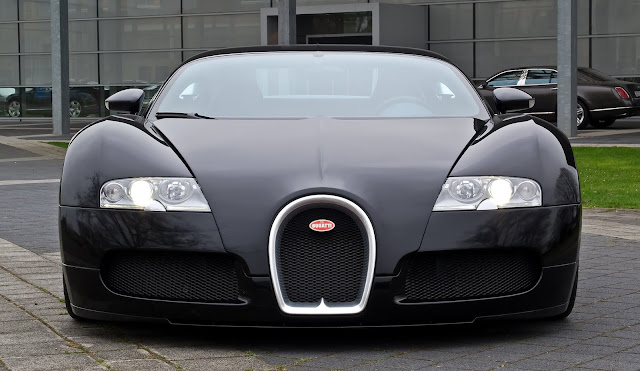 Supercar superlatives abound with the Bugatti Veyron. The list of ways in which it outstripped virtually every other car on the planet is a long one. Top speed - 253mph. Peak power - 987bhp. That was produced by a W16-cylinder engine - in effect, two V8s conjoined. Cubic capacity 7,993cc. The Veyron had 4 turbochargers. It used a 7-speed sequential gearbox ... hooked up to 4-wheel drive. Its motor was cooled by 10, yes, 10 radiators. 0-62mph came up in 2.46s. 'Active aerodynamics' kicked in at 137mph. As tech spec for a roadster goes, it does not get much better than that! The Veyron's high-performance price tag? €1.1m. Bargain!

Volkswagen took over Bugatti in '98. Of course, they would have been looking to make an impact. But it took them seven years to do so. Come 2005, though, and a factory had been built for a game-changing supercar. Just 300 Veyrons were made. They did not, in fact, make much profit. Costs incurred by a car like the Veyron are not easily recouped. As a loss leader for Bugatti, though, the Veyron did fine.

The prototype Veyron debuted at the '04 Paris Motor Show. It was a dazzling affair! The Veyron's bodywork alone was breathtaking to behold. Molsheim, Alsace - the French firm's HQ - had served up a stunner! The Bugatti faithful were suitably blown away. To true believers, the Veyron was little short of a miracle on wheels!