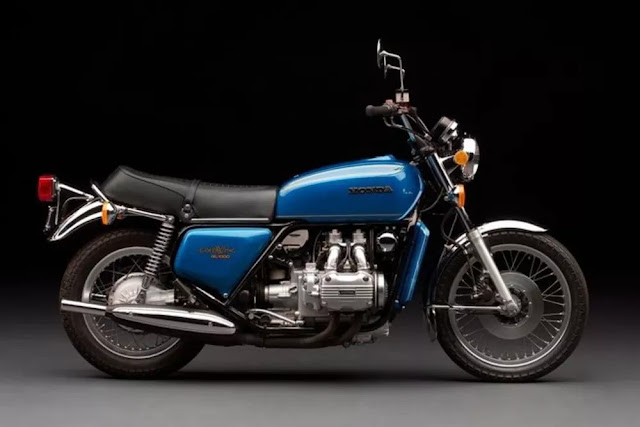 The Honda Gold Wing was - and is - a luxury motorcycle. Then again, Gold Wings always are! Whichever 'Wing' you plump for, there will always be a few constants. It will be big, it will be heavy - and, surest of all, it will be comfortable. So much so, indeed, that extra care may be called for. When riding a motorcycle, it pays to be alert. On a bike as relaxing as the Gold Wing, that could pose a problem!

Not that such concerns have harmed the Wing's sales. The GL1000 had a five-year production run - from '74 to '79. Obviously, it was doing something right. Overall - given its gargantuan girth - the Wing was a smooth and compliant mount. A dry weight of 571lb was a lot to coax through corners - and a handful to haul up. On both counts, though, the Wing scored well. Just in case, the 'Aspencade' came with a compressor ... for on-board suspension adjustment.

The Gold Wing is a bike with a cult following. For an owner, the 'season' starts early and ends late. Summer rallies cascade like confetti ... for those married to a Wing! The bike was always big in the US. And the Gold Wing has graced many a European get-together, too. In fact, the Gold Wing has gone global. Wherever there is a road, there will be a Honda flying up it, sooner or later. And - with a top speed of 122mph - the Wing will probably be sooner!