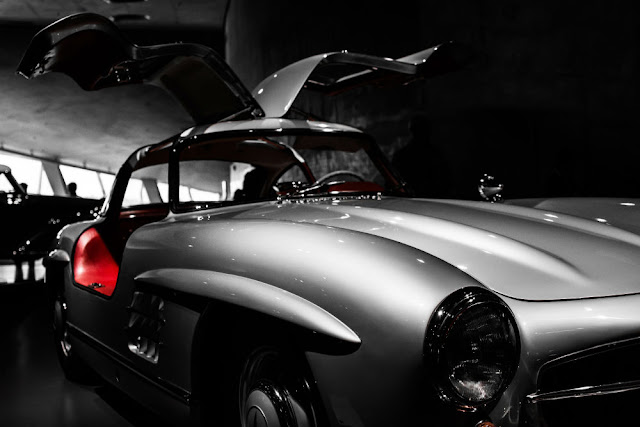 Whilst car doors have their uses, they are seldom the focal point of the overall design. In the case of the Mercedes-Benz 300SL, though, that is exactly what they were. Dubbed the Gullwing, its dexterously hinged doors 'flew' upwards. And if the seagull might not be considered the height of elegance, the 300SL certainly was. Especially with those doors flung high to the sky, the Mercedes was a magnificent sight. Not when perched on its roof, however ... following an accident, say. prising the doors open would then have proved difficult!

But, even with the SL's 'rubber side down', things were far from glitch-free. For starters, its handling was below par. Mainly, because the rear suspension was way too soft. Comfort-wise, too, it was not the best. In the event of rain, let us just say the 300SL's bodywork was not as 'well-sealed' as it might have been! The SL's 'SuperLight' space-frame was sweetly engineered. That said, it was literally a pain in the neck for mechanics. And the SL's engine was inclined 45° - to accomodate a lower bonnet line. Again - while designers doubtless cheered that to the echo - mechanics were not quite so appreciative!

To be fair, the SL was trying to span the gap between a Le Mans prototype and a well-appointed roadster. To say the least, different automotive worlds. For sheer sports car style, it had few peers. On the practical side, well - room for improvement. While it did not come cheap, if you could afford one, the Mercedes-Benz 300SL was, in fact, good value for money. Though - with its technical blemishes - deep pockets of patience also came in handy!