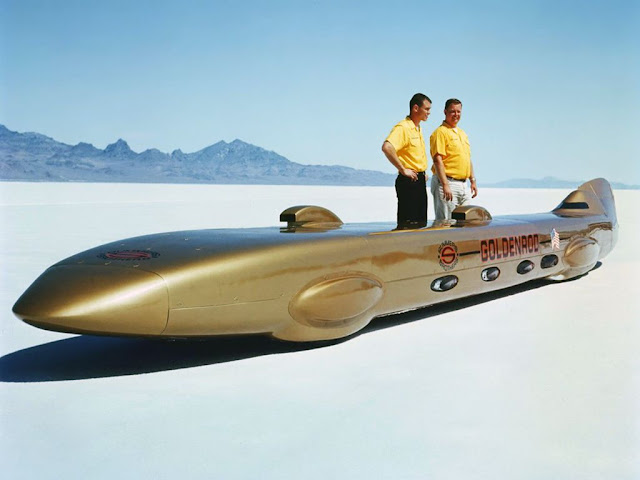 It was in 1965 that Bob Summers drove Goldenrod to a new world land speed record of 409mph. The backdrop was the Bonneville Salt Flats - Utah's Mecca of straight-line speed. What set Goldenrod apart from many of its rivals was its relative orthodoxy. It was, quintessentially, a car ... albeit, one which pushed the automotive envelope. Whereas some of its contemporaries were borderline, at best, Goldenrod proudly declared its roadster credentials.

Key to that claim was its engine. To wit, a 6.9-litre Chrysler V8. Well, actually, four 6.9-litre Chrysler V8s! Two of them turned the front wheels - the other two, the rear. Their combined output was 2,400bhp. And they were not even supercharged. Now, that is efficient engineering! Saying that, they were fuel-injected.

But, Goldenrod was about more than pure power! Aerodynamics were just as important. The car was assembled in Ontario, California - by driver Summers, and his brother Bill. Sensibly, Bob built a mock-up, beforehand. It was this scaled-down model that first caught Chrysler's eye. Summers was sure that his dream could be realised. And - after studying the mock-up - Chrysler agreed. The green light was given - and Goldenrod began to take shape. Its length alone - all 10 missile-like metres of it - buoyed Chrysler with confidence. Summers explained that Goldenrod's weight was to its advantage. It would force its aluminium wheels - shod, as they were, in Firestone tyres - solidly into the salt, he said. He was proved right. Goldenrod duly snatched back the land speed record from Brit Donald Campbell. It was almost 40 years since the USA had made the fastest four-wheeler on Earth. Goldenrod had been shot down from hot rod heaven - expressly for the purpose. A shining example of America's need for speed!