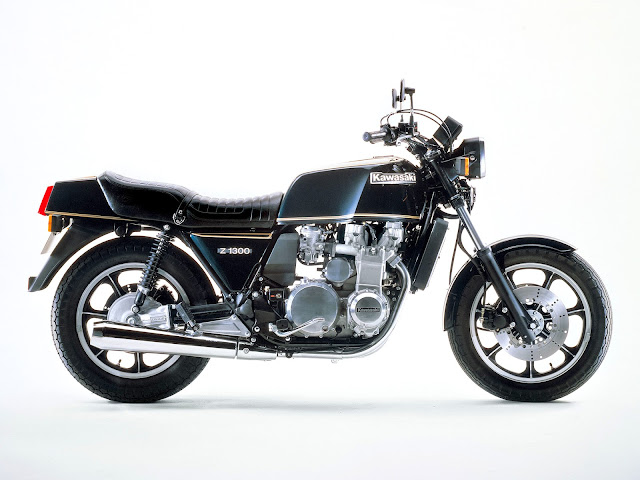 The Kawasaki Z1300 is one of a select set of bikes that sport six-cylinder engines. Such a powerplant is always going to pack a punch. In the case of the Z1300, though, it does not make quite the impact you might think. Why so? The radiator plastered across it. In profile, it is still an impressive piece of kit. But - viewed head-on - the 'Z13' paid a visual price for its water-cooling.

Top whack for the big 'Z' was 135mph. It reached that speed with consummate ease. The inline 1286cc motor gave an output of 120bhp. Manoeuvrability-wise, a bike with a wet weight of 670lb was never going to be agile. That said, the Z13's handling was impressive for a bike of its size.

The Z1300 will forever be bracketed with Honda's CBX1000Z. Another Seventies siren, that machine, too, radiated 'six appeal'. The CBX, though, was a brash brute of a bike - more muscular than the Z13. The latter blended power with refinement. Its shaft final-drive, for example, was much easier on the fingers than oil-soaked chains! So, in many ways, the Kawasaki Z1300 was the perfect motorcycle. So long as you were not a designer. In which case, that pesky radiator grille rather upset the aesthetic applecart!