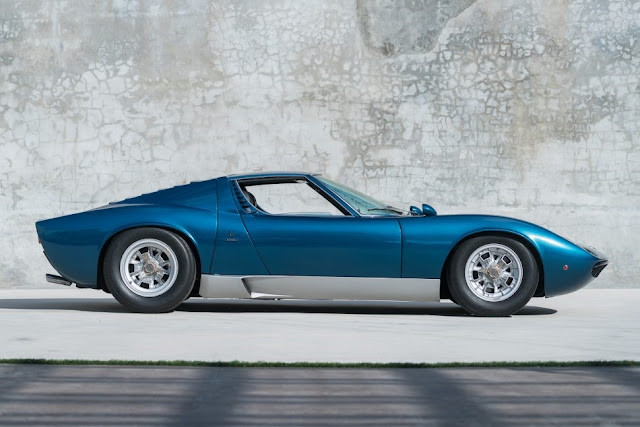 The Lamborghini Miura is considered the world's first supercar. It was conceived - in '65 - by Lamborghini's trio of star engineers. Gian Paulo Dallara, Paulo Stanzani and Bob Wallace wanted a road/race hybrid - equally at home in either environment. Developing the new car after hours, the prototype was dubbed the P400. Boss Ferruccio Lamborghini, though, took time to be convinced. He saw the future in terms of elegant GT cars - rather than the more performance-based products of Ferrari. Eventually, however, he conceded that the P400 may have marketing miles. Somewhat against his better judgement, he gave the Miura the green light.

Aesthetically, the Miura had strong credentials. It was drafted by Nuccio Bertone's legendary design house. A young Marcello Gandini headed up the team. Even at that early stage in his career, he was the pick of Bertone's stylists. The Miura's supercar lines flew freely from his pen. It mesmerised onlookers at the '66 Geneva Show. Named after a Spanish fighting bull, the Miura's muscular beauty demanded respect.

The Lambo's 4-litre V12 pushed out 350bhp. Top speed was 170mph. The mid-engined configuration was installed transversely - behind the two seats. That reduced the wheelbase - and optimised the centre of gravity. All grist to the mill of high-speed handling. The set-up subsequently became the gold standard for sports cars and supercars. The original P400 was released in '66. It was duly followed by the P400S - and finally, by the P400SV. Unsurprisingly, all three were a resounding success in the showrooms. Production stopped in '73. Just 764 cars had been built. The Lamborghini Miura, then, was powerful - but user-friendly. Glamorous - but refined. Well, apart from the S model's false eye-lashes! He had taken some persuading, but - finally - Ferruccio had called it right.