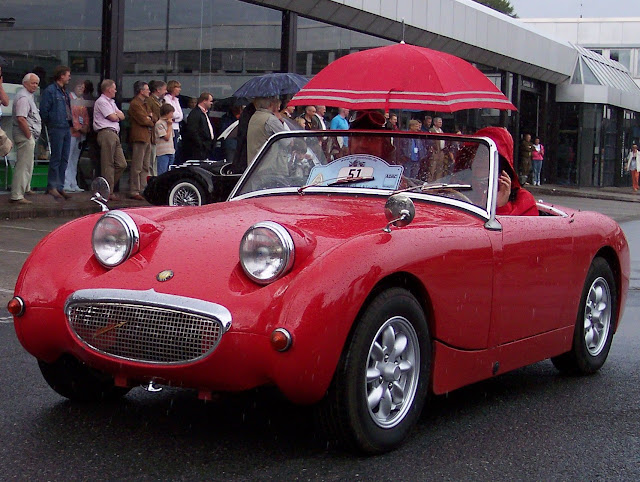 The Austin-Healey Sprite Mk1 is, arguably, the world's cutest ever car. Its most adorable feature? Some may go weak at the knees for its seductive smile. That came in the form of an emoji-style grille. Most, though, would faint at those 'foxy' frog eyes - hence the car's Frogeye Sprite moniker. In fact, those heart-melting windows of the automotive soul might never have opened at all - at least, not in daylight. Donald Healey - designer of the Sprite - drafted it with retractable headlights. Mercifully - for classic car buffs - the cost of fitting them proved prohibitive. So, 'pop-up' became 'pop-eyed' ... and a legend was born.

The Sprite, though, was not just about styling. In the Fifties, its top speed of 84mph impressed. Particularly, since the Sprite's inline-four engine made just 43bhp. Capacity was 948cc. We are talking efficient British engineering. Then again, there was not a lot to lug about. The Sprite, after all, measured only 3.5m in length. Certainly, the Frog-Eye was economical. 45mpg was the low-cost reward for a relaxed driving style. Saying that, tweaking the 'A Series' engine was a breeze. The whole of the Sprite's one-piece nose section lifted up - allowing for the easiest of access. The Frogeye's 4-speed 'box served up the power in bite-size chunks.

The Sprite was the younger sibling of the 3000 model - or 'big Healey', as it was commonly dubbed. BMC's shelves, then, were heaving with parts which bolted straight onto the Sprite. Most of the components also saw service on Morris Minors and Austin A35s. 38,999 Frogeyes were built. Sadly, Austin-Healey broke the mould after making the Sprite Mk1. Cars would never again be quite so cuddly!