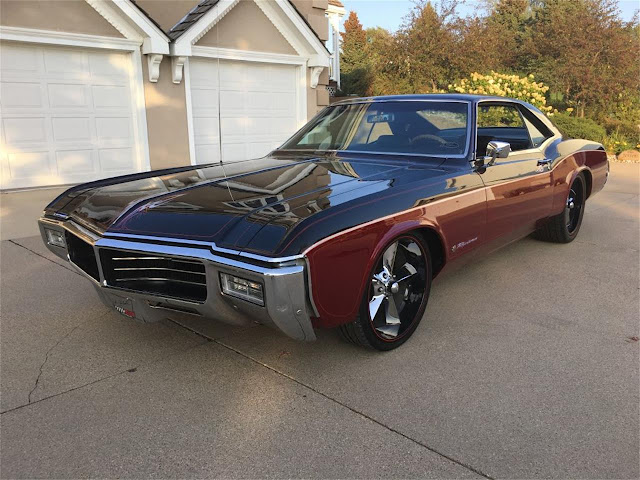 Its name alone told you all you needed to know about the Buick Riviera. It was a classy automobile! Built at a time when in your face fins and chrome were ubiquitous, the Riviera oozed cool sophistication. Automotive haute couture, so to speak. Spotlessly clean, in design terms, its shape was especially powerful in profile. The Riviera's elegantly-drawn body was along the lines of, say, a Jaguar or Bentley. So European were its looks that it might almost have been described as the Rolls-Royce of American cars! Interior décor, too, was in the continental style - complete with rounded dashboard dials and floor-mounted gear-shift. Electric windows and power steering came as standard, naturally!

But, the Riviera's charms were more than skin-deep. In highest-spec 7.0-litre guise, its V8 engine produced no less than 365bhp. Top speed was a cool 130mph ... pretty good going for a five-seater saloon car. A two-speed automatic gearbox kept it all on an even keel. Not that the Riviera was perfect, of course. Handling was average - not helped by the live rear axle. And its drum brakes were prone to high-speed fade.

The Riviera, then, was a satisfying blend of American and European. The best of both worlds, Buick hoped. For all its cosmopolitan chic, there was still more than a hint of muscle-bound machismo. Straddling the 'pond', you might say. At the time, it was the bee's knees in transatlantic travel. Indeed, many a Mediterranean tourist would not be seen in anything else. Would they, chéri?