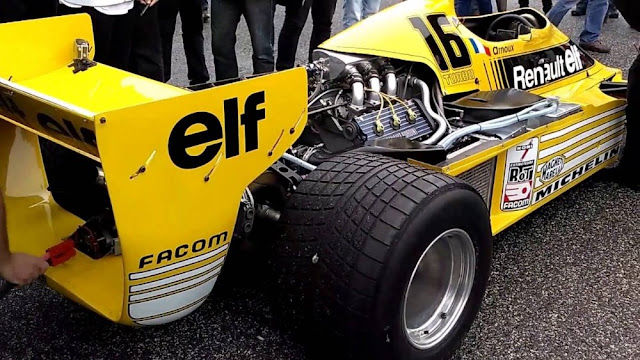 The Renault RS01 never won a race. Not much to write about, then? But, winning is not everything - even in Formula One! The RS01 was one of the most important GP cars ever built. That is because of what it brought to the sport ... money! In the Sixties, the cash-stoked spectacle of today's billion-dollar industry, was but a glint in a financier's eye. Then, F1 was about gas, grease - and the spirit of motoring. It was not that far removed from the cars and parts that could be viewed in any quality showroom. The Renault RS01 would change that ... for better, or worse! In the Seventies, GP racing would start to 'go global'. For an investor, that was worth risking the odd oil stain on a suit!

Renault's RS01 set a trend. The Gallic giant's commitment to F1 led fellow manufacturers to do likewise. Alfa Romeo, Honda, BMW et al. - they would all want a piece of the F1 pie! It was the mid-'60s when Renault spotted a shot at the big time. A 'blue riband' 3-litre Formula was in the offing. Motorsport's governing body had given the green light to supercharged, and turbocharged cars .... so long as they had no more than half the capacity of their normally aspirated rivals. Renault saw a chance to position themselves at the cutting edge of engineering! They chose to go the turbocharged route. Already in F2, the team had a two-litre V6 on its bench. Pared back to 1.5 litres - and duly turbocharged - the new Renault engine was done. Slot it into a stiff chassis - by Andre de Cortanze and Jean-Pierre Jabouille - and Renault were ready to go racing. Jabouille would even double up as driver!

In theory, the RS01 should have been pace-setting. It made substantially more power than its rivals. In practice, though, it was a mixed bag. The downside was poor reliability. Added to that, was 'turbo lag'. The charge was far from light-switch sharp! That made the car a real handful - even for a driver of Jabouille's talent. Improvements were made ... but the RS01 'did not finish' too many times! Fourth place points eventually came - at the '78 US GP. A year later, Jabouille put the RS01 on pole - at Kyalami, South Africa. The non-turbocharged cars were suffering high altitude sickness! Jabouille did go on to win - in the Renault RS10 - but that was with 'ground effect' aerodynamics. The RS01, though, was a game-changer - spawning a legacy of successors with turbocharged power. Those cars - and their constructors - reaped rewards their progenitor did not. But it was the Renault RS01 that made motorsport history!