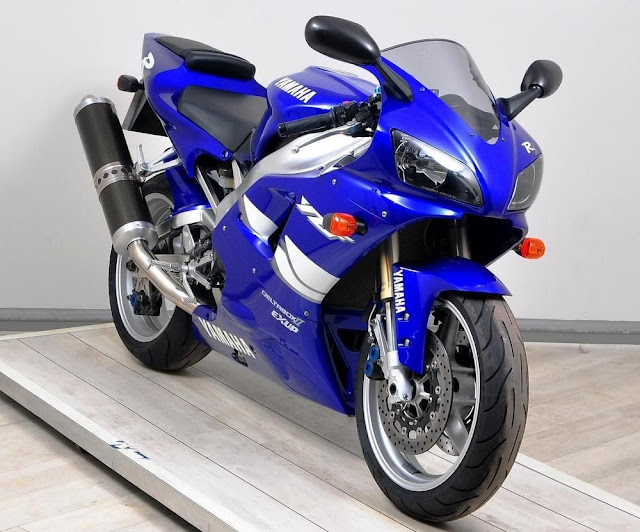 The Yamaha YZF R1 was about as close to a race-bike as a roadster can get! Everything about it screamed speed. Its fairing parted air, like a shark's nose shifts water. Its tail-piece was sharp enough to shave with. The R1 tasted number-crunching good! A power output of 160bhp. A dry weight of 389lb. A top speed of 170mph. Satisfying stats, to be sure!

The R1 was not just quick, and aerodynamic - it was agile as an acrobat. If anything, it was 'flickable' to a fault. Corners could be too tempting! Short and slim, its wheelbase was minimal. Were the R1 human, its weight loss would be worrying! Engine-wise, there were 5 valves per cylinder. Do the math ... and that made 20 of them - doing a mechanised dance of staggering precision. Cycle parts were state-of-the-art. Suspension, and brakes responsive as razor-blades. In every department, the R1 excelled. As you would expect - it sold in shedloads!

The R1 was the kind of machine lives are built around. It inspired, not dedication - but devotion! Whether an R1 owners' club, track days, or clubman's racing - no other bike would do! In short, the Yamaha YZF R1 was a two-wheeled icon!