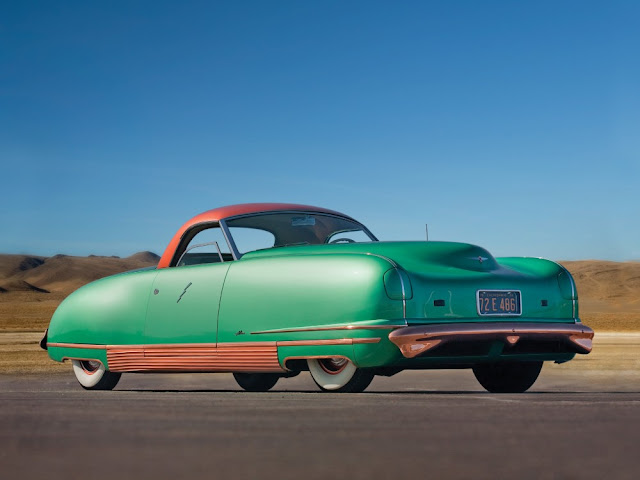 The Chrysler Thunderbolt was named after a land speed record car. That mission had been accomplished at Bonneville Salt Flats, Utah, in 1938. Hence, the chrome lightning flash on the Thunderbolt's doors. Its straight-eight engine made 143bhp. Doubtless, somewhat short of its LSR-breaking namesake. The 'dream car', too, was a promotional tool. In 1941, six Thunderbolts duly departed Detroit. They would do the rounds of Chrysler dealerships, throughout the USA. These prototypes generated publicity for the roadsters to come.

Alex Tremulis was tasked with styling the Thunderbolt. A freelance designer, the commission from Chrysler would kick-start his career. The Thunderbolt was radical. Its bodywork was a rounded slab of aluminium. Beneath it, wheels and tyres were only partially visible. The body was built by Briggs coach-builders. Technically, too, the Thunderbolt was new. Its roof and headlights were electrically retractable. Tiny push buttons opened the doors. The air intake was below the front bumper. All avant-garde, for the time.

The chassis, at least, was mainstream. It was carried over from the Chrysler New Yorker. Otherwise, sci-fi 'gadgetry' ruled the design roost. Toy tin replicas sold by the shedload! Chrysler's Thunderbolt did commercially, what its precursor had done competitively. Went ballistic, basically!