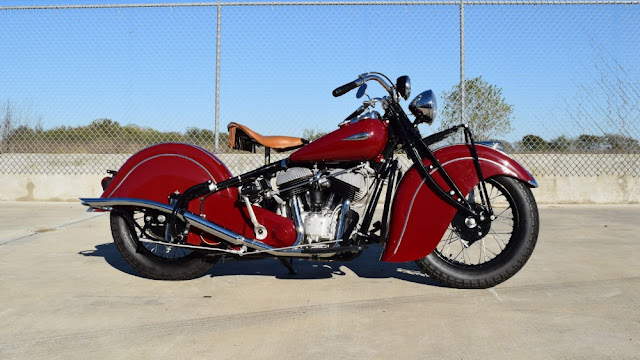 Harley-Davidson can lay claim to manufacturing the world's best-known motorcycles. Well, American ones, at any rate. But, Harley has always had a rival. The mere mention of 'Indians' has long instilled panic in the suited and booted, in the Harley marketing department!

In the '20s, Indian's Springfield factory was high up the motorcycle heap. The Chief was their biggest asset. The 1200cc engine, in the 1947 model, was good for 85mph. Tuning took it to the 'ton'. An Indian, though, was not about death-defying numbers. Rather, it evoked the spirit of adventure. A bit like that firm in Milwaukee, in fact!

Indian motorcycles were extravagantly styled. Nowhere more so than the finely-fettled fenders. Their trademark curvature was unmistakable. Harley front mudguards are sometimes skimpy affairs. Those which adorn an Indian are heraldic. Almost as if the front wheel were wearing a headdress! Indian, then, was a company which liked to cut a dash. Sadly, the 'Roaring Twenties' glory days faded for Indian - while Harley went on to world domination! But, as in the game ... while most kids grow up wanting to be a cowboy, there are always one or two who would really much rather be an Indian!