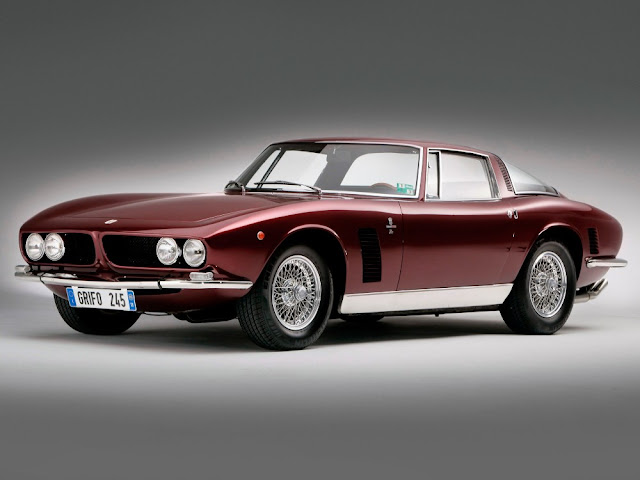 There were just 504 of the Iso Grifo built - in ten years. We are talking exclusive! But then, it was styled by Bertone. The 'Grifo' was based on the Rivolta GT car. Ex-Ferrari engineer Bizzarrini shortened the chassis - for added agility. It was then passed on to Bertone. After that, Iso started to think of it a potential rival to Ferrari!

Time to add some speed to the mix! Enter the Chevrolet Corvette. Well, its engine, at any rate. The iconic American V8 imparted some serious 'grunt' to proceedings. That did not please the European purists. But for those content with beautiful bodywork - plus supercar oomph - things were gelling nicely! The top-spec Grifo came with the 7-litre version of the Chevy V8. With a fair wind, that made it good for 170mph. It hit 70 in first gear! The V8 unleashed 390bhp. And all the while, Bizzarrini's reduced wheelbase was helping transmit that power to the tarmac. The full complement of brake discs was wisely provided.

By now, the Grifo was going head to head with the Ferrari Daytona, and Maserati Ghibli. For a firm the size of Iso, that was some achievement! Sadly, financial woes were set to plague it, in later years. Iso finally succumbed to the fuel crisis, in '74. But by then - in the form of the Grifo - they had produced a thoroughbred sports car of the highest order.