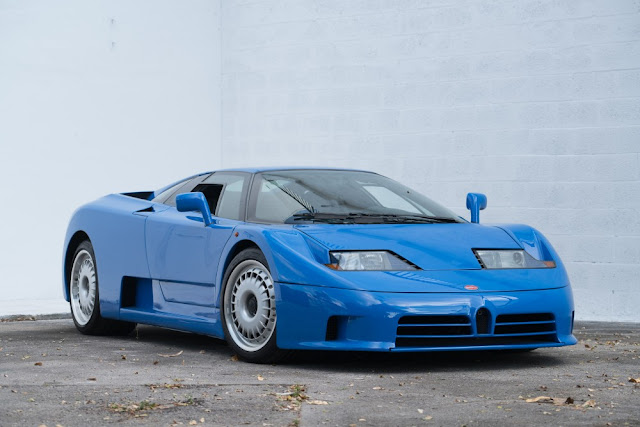 The Bugatti EB110's code-name was a tribute to the firm's founder, Ettore Bugatti. It was launched on the 110th anniversary of his birth. Fittingly, Bugatti's new supercar was unveiled in Paris. When it went on sale, the EB110 had a price tag of £285,000. If the standard EB110 was not enough, you could always front up another £50,000 - and drive off in the Supersport version. Its 611bhp output delivered 221mph! Even in standard trim, the EB110's top speed was 212mph.

Top-drawer supercar designer Marcello Gandini was originally recruited to style the EB110. His mock-up, though, was deemed too radical by the Bugatti top brass. Subsequently re-worked by Italian architect Giampaolo Benedini, the EB110's aluminium body looked superb. The engine, too, was a work of art. Its V12 layout comprised 4 turbochargers, and 60 valves. There was a 6-speed 'box, and 4-wheel drive. Handling was precise - to say the least!

In 1987, entrepreneur Romano Artioli had stepped in to rescue the Bugatti brand-name. He built a state of the art supercar factory - in Campogalliano, Modena, Italy. Indeed, Giampaolo Benedini - the car's designer - had previously architected the factory in which it was built! To head up the engineering team, Artioli had hired acclaimed technical director Paulo Stanzani. Among the Bugatti EB110 owners would be famed racing driver Michael Schumacher. Which pretty much says it all, really!