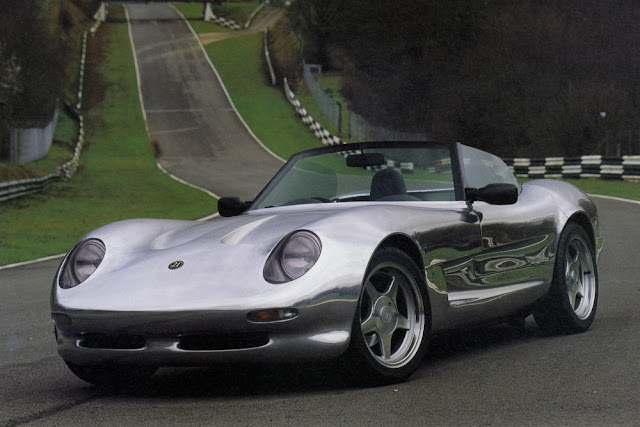 The Caterham 21 debuted at the Birmingham Motor Show, in '94. It marked 21 years of Caterham Seven production. Design niggles delayed the launch of the new car for two years. The 21's enhanced equipment levels posed a challenge to Caterham. Respected manufacturers though they were, the small British firm were on a learning curve with a car of this complexity. The 21 prototype had, literally, dazzled show-goers. It was fetchigly finished in silver-polished aluminium. The production car's finish was more prosaic - standard paint on glass-fibre. Aluminium, though, could still be had as an extra. The prototype 21 was displayed with a Vauxhall JPE engine installed. Production cars were fitted with Rover 'K-series' 1.6-litre motors. There was also a VHP - Very High Performance - version of the 1.8-litre MGF engine available.

When the 21 did finally hit the road, it was to great acclaim. Aerodynamics were well-sorted - helping give a top speed of 131mph. Chassis-wise, the 21 was similar to the 7. The new car thereby inherited the superb handling characteristics of its predecessor. An important way, though, in which the two differed, was in practicality. The 7 - among the most exhilarating cars ever to drive - was far from user-friendly, as such. It was geared entirely toward the 'pure driving experience'. The 21 came with much more in the 'mod cons' column. As an all-round package, it was streets ahead of the Seven.

Caterham handed the task of styling the 21 to designer/journalist Iain Robertson. He sought inspiration in the race-bred lines of the Lotus Eleven. The 21's interior, too, was well-crafted. Though the cockpit was narrow, wide sills kept it this side of cramped. A vertical strip of switches was a deft design touch. No more than two hundred 21s per year were built. That kept Caterham from biting off more than a company of its size could chew. And, of course, there was always the Lotus legacy to consider. The Caterham 7 had done its parent marque proud. The 21, too, was a worthy successor.