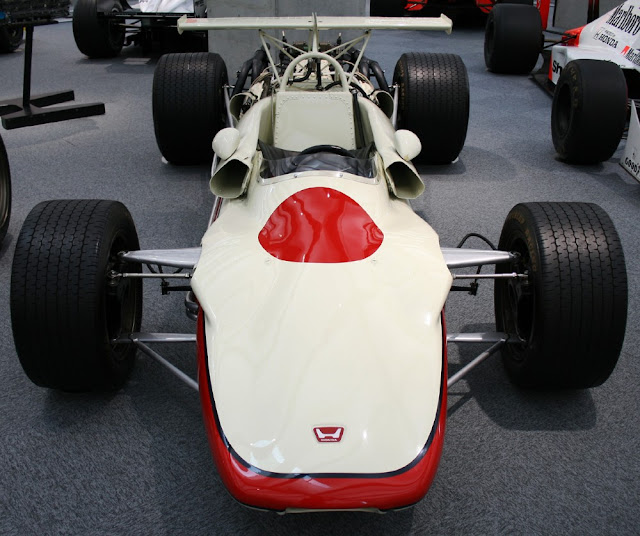 The Honda RA302 was a while in the making. The Japanese giant had arrived in F1 in '64. It came equipped with its transversely-mounted V12 motor. A complex masterpiece of engineering, the V12 was the talk of the GP paddock. Honda took almost two seasons to make it to the top step of the podium. Their first win came in Mexico - in the last race of the 1.5-litre era. If Honda thought that was job done, they were wrong. In '66 and '67, results were distinctly lacklustre. At the time, all of the engines were overweight - certainly by today's standards, at least. Honda's exotic powerplant, though, tipped the scales at 100lb more than its rivals. Not what you want in F1!

Thankfully for Honda, John Surtees was at hand. By the start of the '68 season, he had helped develop the RA301 car. It was tidier of design than its predecessor. It was also more powerful. Surtees was assured that a lightweight V12 was on the way. Which was when head honcho Soichiro Honda threw a serious-sized spanner in the works. First and foremost, his sights were set on selling N600 saloon cars. They were still air-cooled. Nor did Honda-san overlook his motorcycle division. The bikes, too, were powered by air-cooled engines. For Mr Honda, bread and butter business trumped motorsport activity. He ordered his race department to come up with an air-cooled alternative. The lightweight V12 Surtees had been promised was put on the back-burner.

In due course, Soichiro Honda got his air-cooled race-car. Parked in the Silverstone paddock, the Honda RA302 looked a dream. Light and compact, its 120° V8 sat snugly at the back of a monocoque chassis. It was duly fired up - with Innes Ireland at the wheel. The erstwhile Lotus legend was now a journalist. He was about to take the RA302 out for its first test-drive. When he returned to the paddock, it was not with good news. Handling-wise, the RA302 was all over the shop. That did not improve Surtees' mood - which was already testy. He had not even known the car was coming. Never mind that it had been entered in the French GP! He flatly declined to have anything to do with the underdeveloped car. Honda France stepped into the breach. Jo Schlesser - looking to move up from F2 to F1 - would do the driving at Rouens. Come race-day, and the weather was dreadful! Schlesser and the RA302 started towards the back of the grid. Surtees, meanwhile - still in the RA301 - was soon vying for the lead. On only the second lap, Schlesser's air-cooled engine cut out. The RA302 careened into a bank, and caught fire. Tragically, the French ace died in the blaze. Later that year - at Monza, Italy - Surtees did finally drive the recalcitrant car. But, it was to no avail. At the end of the '68 season, Honda withdrew from racing. Perhaps chastened by their experience with the RA302, they did not return until the '80s.