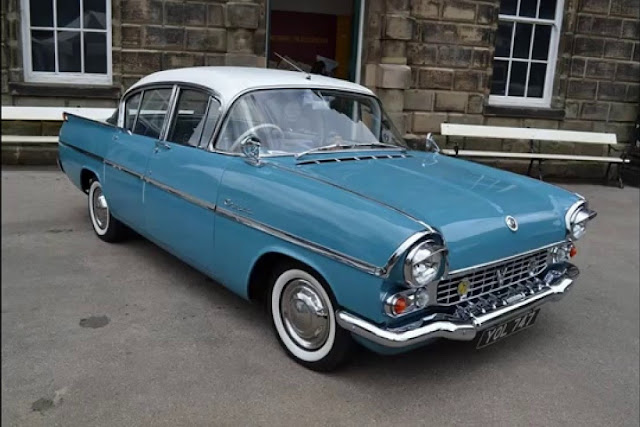 The Vauxhall Cresta appeared in '57. At the time, Vauxhall - a mainstay of British car manufacturing - was under the aegis of GM, in Detroit. Unsurprisingly, the new Cresta PA picked up several US styling motifs. The rear fins, for example, were pure Americana ... suitably reined in for British tastes, of course! Likewise, the PA's wraparound windscreen clearly originated on the other side of the 'pond'. Stateside-style two-tone paint - and whitewall tyres - were optional extras. The Cresta was Vauxhall's answer to the Ford Zodiac. It was there in every larger-than-life line of the British-made car. The PA's cabin continued the 'Britmobile' theme. Bench seats, white steering wheel, and column shift all came courtesy of the American Dream.

Mechanically, the Cresta harked back to the E Series. Its pushrod straight-six engine produced 78bhp. That gave it a top speed of 90mph. Capacity was 2,262cc. Power was delivered in relaxed fashion. The gearbox was a 3-speed synchromesh set-up. Soft suspension was via a leaf-spring rear axle, wishbones and coil springs. Many of these components derived from the Vauxhall Velox - the Cresta's less sophisticated predecessor.

In '59, the Cresta got a face-lift. Its three-piece rear screen became one-piece. Up front, the 'egg-crate' grille was revised. Coachbuilders Friary built an estate car version. The Queen gave it her personal seal of royal approval ... she drove one for years. 1960 brought further Cresta updates. Its motor was taken out to 2.6 litres. That upped output to 96bhp. The PA was given larger wheels and fins. The gearbox was now a two-pedal Hydramatic auto. Or, alternatively, a dual overdrive manual. Front disc brakes were servo-assisted. British motorists clearly liked the improvements ... the PA sold well, right up to '62. By then, though, its fins - state-of-the-art in the '50s - looked a tad past their sell-by date. Its production run over, the Vauxhall Cresta was put out to well-earned pasture ... in beautiful British sunshine!