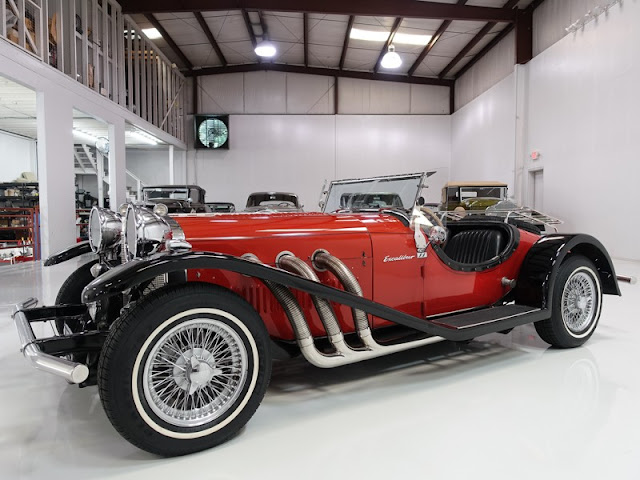 The Excalibur SS was styled by Brooks Stevens - one of the great industrial designers. Stevens was prolific, to put it mildly. In the course of his 61 years in the profession, he amassed 550 clients - and thousands of designs. Thankfully for gearheads, some of them were for cars. Probably the best-known was the Jeep Jeepster ... the first cool 4x4.

Arguably even cooler, was the Excalibur J sports-racer. It first appeared in '52. But, Stevens really hit the jackpot - at least in terms of publicity - with the Excalibur SS concept car. Unveiled in '63, it fitted in perfectly with the increasingly popular 'retro' design trend. When the SS wowed the NY Auto Show, Stevens was inundated with orders. With its Studebaker Lark chassis - and supercharged V8 engine - the SS was an intriguing mix of old and new. Dyed-in-the-wool vintage fans did not like it. Everybody else thought it was great!

Concept complete, Stevens' next step was to render the SS road-ready. A Chevrolet Corvette motor was inserted into the rear of a modified chassis. In true vintage style, there were flexible metal exhaust pipes - and an aluminium radiator shell. The 'retro' body panels were in fact forged from glassfibre! Stevens' two sons were tasked with marketing the SS. Roadster and Phaeton versions were available. Peak power was 300bhp. That gave a top speed of 140mph. 359 Excaliburs were built. Brooks Stevens' SS was never going to be to everyone's taste. But surely even the most picky of vintage freaks can find something to like about it? Perhaps not!