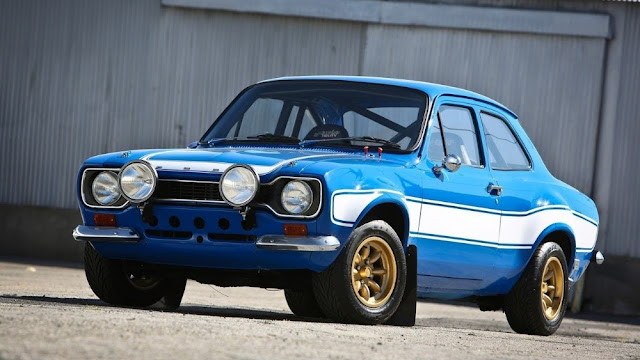 In the Seventies, the Ford Escort was an automotive must-have. Especially when kitted out in 'go faster' stripes, the RS ticked all the right boxes. With RWD - and a light body - the Escort was a boy racer's dream come true. Cameo rôles in TV show The Professionals bolstered the car's hard-hitting image. They did its sales figures no harm, either.

The RS was a top rally car. Indeed, the 'Mexico' model marked Ford's win in the London to Mexico Rally. The RS 1800 was built to compete. Complete with twin-cam motor - and all round disc brakes - many an owner took to the stages. On the road, too, the Ford Escort flew. 'X-Pack' optional extras saw to that. The nose of the RS 2000 sported a 'droopsnoot' ... a polyurethane strip, reputed to cut drag.

Technically, then, the Escort impressed. Suspension-wise, it was on solid ground. A set of MacPherson struts sorted the front. A live axle - on leaf springs - took care of the rear. The RS' monocoque steel shell could be strengthened. Its in-line four engine produced 86bhp. That made it good for 103mph. Later versions upped both numbers. Transmission was 4-speed manual. The Escort interior was slick. A goodly array of instruments, bucket seats, and a sports steering-wheel all helped with high-speed shenanigans. Which - to a large degree - was what the Ford Escort RS was about. A 'good-time Charlie' of a car, if ever there was one!