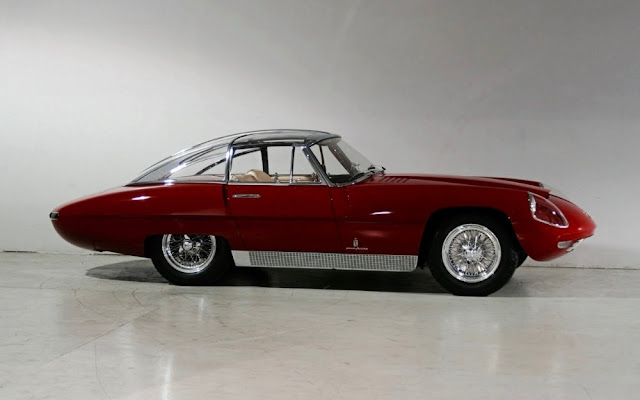 'Dream cars' are offbeat design prototypes. Typically, they are displayed at motor shows. In much the same way as couturiers go out on a limb to wow fashionistas, so coachbuilders try to break out a 'buzz' around what will shortly be showroom products. The raison d'être, then, of dream cars, is to make an exhibition of themselves!

A past master of such creative artifice was Battista 'Pinin' Farina. He set up shop in Turin, Italy, in 1930. Pininfarina - his automotive design studio - would become world-famous. In 1946, Alfa Romeo presented Pinin and his team with a template. A 3,000cc, 246bhp template. Alfa - based in Milan - had built a half dozen cars, just for experimental purposes. Pininfarina were briefed to go the 'Superflow' route. Aerodynamics would be key.

The driving force behind the CM was the US. American motorists had gone gaga over the space-age - the Sixties space-age, that is. The Ford Mystere had had a lot to do with it. Its roof consisted of a transparent plastic bubble. To American drivers, it must have conjured up images of lunar landing craft, and the like. Alfa were minded to cash in on the fad - with Pininfarina's assistance. For their first version of the new car, the design gurus had introduced fins to the rear wings. The aim was to help high-speed stability ... though it did no harm that they looked Saturn 5 cool, too! The roof emulated the aforementioned Mystere - being similarly see-through. Mirroring the roof, the headlights were surmounted by transparent streamlined covers. Sadly, that was not sufficient for gizmo-addicted Statesiders. As a result, Alfa were forced to do a U-turn - and readdress the European market. Pininfarina's brief was altered accordingly. The Alfa Romeo 6C 3000 CM thus straddled the transatlantic divide. That it did so practically - as well as elegantly - was due to the distinguished design skills of Pininfarina.