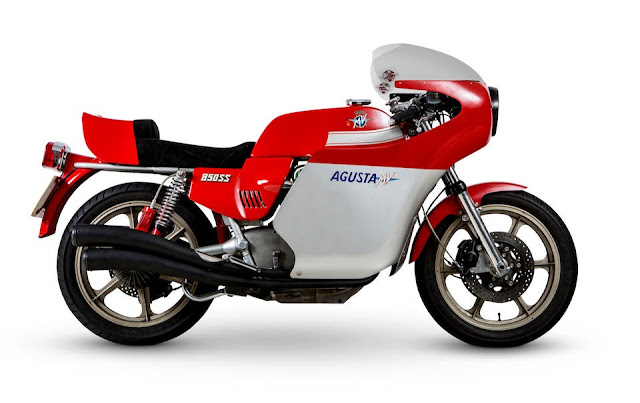 If you name a bike after a racetrack, it had better be fast! In the case of the MV Agusta Monza, it was. Top speed was 145mph. That was good going, in '77 - when the Monza was released. And that from a bike weighing a portly 429lb. Of course, the engine had a lot to do with it. Its bore was wider than its MV America predecessor. That took it up to 837cc. The compression ratio had been raised. A Marelli distributor - and hotter cams - had been added. Power had risen to 85bhp - at 8,750rpm. The 750S America - built for the US market - had upped the ante from the 750 Sport. In turn, the Monza had trumped them both.

Styling-wise, the new MV was equally upbeat. It had 'café racer' written all over it. Low-set 'bars - and a humped-back seat - recalled MV's GP bikes. Right up until recently, the Italian firm had won 17 top-flight titles - on the spin! Sadly - for MV, at least - the advent of the Japanese 2-stroke motor had put the mockers on world domination. The Monza's red and silver livery further enhanced its race-based design brief.

Key to that brief was Arturo Magni. He was MV's chief engineer. Reporting to him were mechanics from MV's former 4-stroke race team - before the 'stroker' invasion! Magni meted out modifications to the Monza. Among them were a more free-flowing exhaust, a chain-drive conversion (from the standard shaft-drive) - and an even bigger-bore kit. Magni's twin-loop frame firmed it all up. Top speed and acceleration both improved. Handling, too, benefited - as power delivery was smoothed out. The MV Agusta Monza was impressive with factory settings. Magni's magic mods only made it an even finer motorbike than it already was!