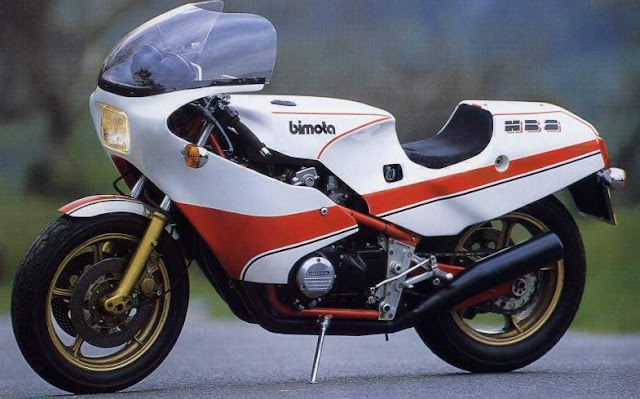 The Bimota HB2 was the second offering from the illustrious Italian bike builders. The HB1 set the template. Massimo Tamburini – designer at Bimota – had totalled a Honda CB750, at Misano racetrack. Its four-cylinder engine was salvaged from the wreckage. Bimota bodywork was then wrapped around it. The resulting Honda/Bimota hybrid was the first in a line of stylish, trend-setting motorcycles.

The HB2 upped the power ante. The new bike sourced the motor from Honda’s CB900F. 95bhp was duly available. And the Bimota was lighter than the Honda. It weighed in at just 441lb. State of the art suspension was then added. Ceriani teles were dialled in with a progressive-rate monoshock. A tubular steel/aluminium plate frame ensemble gave extra stability. With a 138mph top speed – and more than impressive handling – the new Bimota etched a benchmark. It had taken the superbike fight to its Japanese rivals.

The challenge would have come as no surprise to the Oriental ‘big four’ manufacturers. Bimota had long done the business in GPs. In the showrooms, their unique selling-point was superb Italian looks, aligned with Japanese hi-performance. Sadly, less than 200 HB2s went on sale. The HB3 set the seal on the Honda/Bimota alliance. As the HB2 had done before it, the HB3 also uprated the package. This time, the Honda CB1100R engine was used. By that point, however, the Japanese marques had caught up. Notwithstanding – with the HB2 – Bimota had blazed a trail for beautiful, brain-bending bikes!