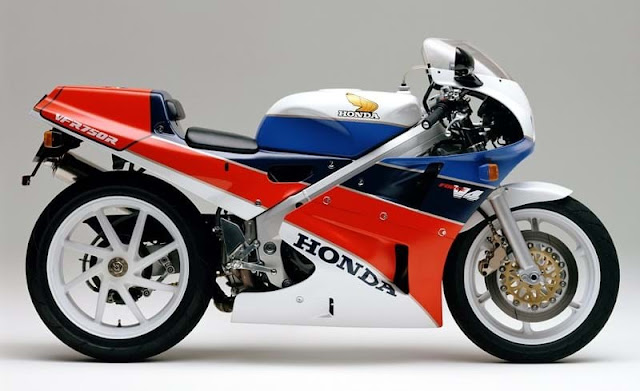 The Honda VFR750R RC30 out-race-repped all its roadgoing rivals. Certainly, in visual terms, there was little to distinguish it from the RVF 750 race bike , on which it was based. Technically, too, it was similar. On the face of it, the component which differed most was the roadster's exhaust … compared, at any rate, with the racer's light, free-flowing set-up.

Of course, other parts, too, were not on a par with the race bike. The roadster's V4 engine was never going to be tuned to the degree of its competitive sibling. Notwithstanding, it still output 112bhp - at 11,000rpm. That gave a top speed of 153mph. More than enough for most mere mortals. Though optimal tuning of the high-grade suspension system helped. Not that it was easily achieved!

American rider Fred Merkel took two consecutive WSB titles on the RC30 racer - in '88 and '89. Briton Carl Fogarty did the same in motorcycling's Formula One series. Endurance racing, likewise, was meat and drink to the RVF 750. After all - so far as Honda were concerned - the RC30 was first and foremost a race bike. But - with its low-slung front end, aluminium twin-spar frame, and single-sided swingarm - the road bike had benefited hugely from the care lavished on the racer. The VFR750R, then, was in a league of its own. Honda's commitment to the project had paid dual dividends. On both road and track, the RC30 reigned supreme!