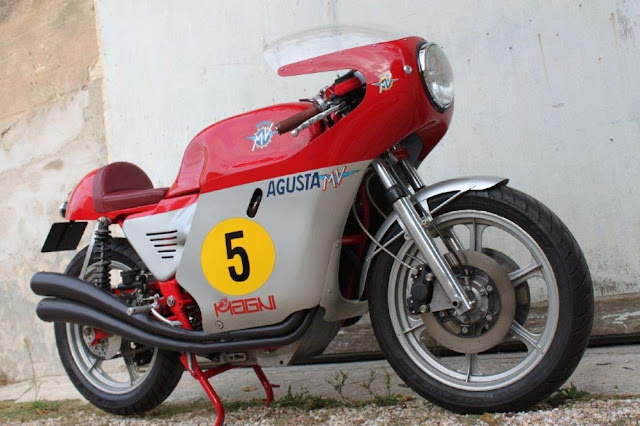 In standard form, the MV Agusta 850 was an impressive motorcycle. Add to that the 'Magni' factor - and it was even better. Arturo Magni had managed MV's racing department. Under Magni's aegis, MV took 17 top-flight titles on the trot. That surely has to be considered a success!

Eventually, Magni switched his attention to roadsters. To that end, he started up his own engineering facility - in Gallarate, Italy. A steady stream of MVs began rolling into his premises. They did not have far to come. Magni introduced them to his own take on engine components, and chassis modifications. The Magni effect was marked. A top speed of 140mph was now on tap. But, it was not only a power shift that Magni's mods had made. MV's 850 was weighed down by a bulky shaft-drive. Magni's chain-drive conversion kit took handling, too, to another level. Also key to the new 850's stability was Magni's custom-built frame. The single spine original had been replaced by two top tubes. Magni's motor-related mods included uprated cams, high-compression pistons, and a four-piece exhaust. And, that exhaust announced its arrival from a considerable distance away!

As befitted his previous exploits, Magni found inspiration in the GP scene. Most notably, the 850's race-style 'number-plate' signified its high-speed pedigree. A full fairing - on which the plate was placed - lent yet more race-bred mystique. The Magni's performance stats - at least, from a road-bike perspective - amply justified its racy looks. The addition of high-grade parts - from Marzocchi, Koni and Brembo - had fuelled the Magni's fire still further. To say Arturo Magni had racing in his veins would be an understatement. Those 17 500cc World Championship wins spoke for themselves. He had slipped seamlessly into the world of specialist road-bikes. No MV left his facility the same as any other. They were all, ultimately, bespoke bikes. As you would expect, a high price tag was duly attached. But - for those with the wherewithal - the MV Agusta 850 Magni represented the pinnacle of hand-built pedigree!