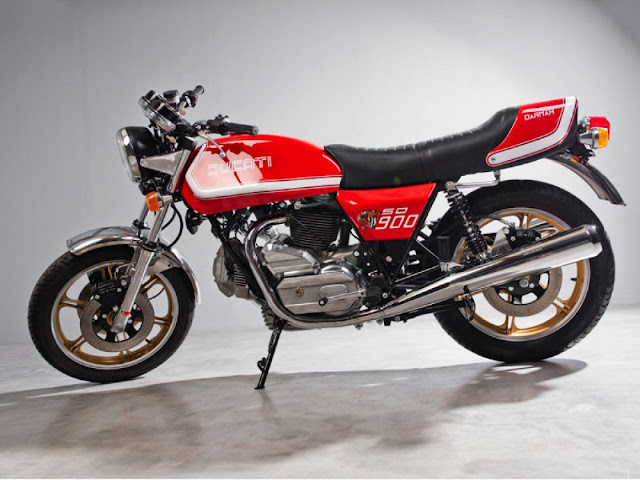 The Ducati Dharma SD was a fine, if flawed motorcycle. Certainly, there was much in the plus column. Performance, handling and styling all passed muster - and more. In excitement stakes, the SD scored heavily. In practicality terms - less so.

Styling-wise - thanks to Italjet - the Sport Desmo was in fine fettle. The agency was run by Leo Tartarini. In the past, he had been a Ducati race rider. Now bringing his design skills to the table, for the Dharma, Tartarini fashioned a free-flowing seam of tank, seat and tail. The bike's 864cc V-twin engine looked impressive from any angle. Smart Conti pipes - and well-crafted wheels - set off the SD's sartorial swagger.

On the technical front, too, the Dharma delivered. Admittedly, it was not the most powerful bike on the block. Its 60bhp output gave a top speed of 115mph. Real-world riders, however, were happy with that. And the bevel-driven valvetrain meant maximum use could be made of the poke that was available. Reasonable speeds, then, were a doddle for the Dharma. Ducatis had long been revered for their handling. The SD's firm, but flexible frame, sweetly-tuned suspension, and responsive brakes and tyres provided a reassuring and relaxed ride. Long and lively journeys, then, should have been a gimme. Too often, though, they were an opportunity for gremlins to emerge. To put it bluntly, build quality was not Ducati's forte. Electrics, say, could be 'trying' - especially in wet weather. No matter how beautiful a bike, viewing it in a downpour does not reveal it in its best light! And, peeling paintwork and chrome - while less of an immediate issue - eventually would also test owners' patience. So, a classic case of swings and roundabouts. In many ways, the Ducati Dharma SD was an all-round delight. So long as you had a lock-up! Oh, I almost forgot … Dharma was a cuddly lion in a children's book.