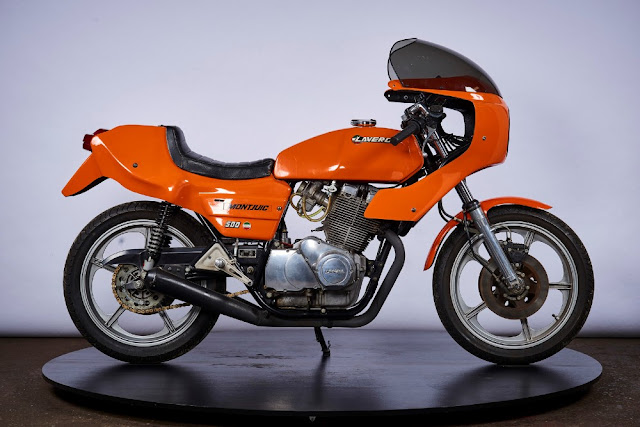 When you bought a Laverda Montjuïc Mk2, you got what it said on the tin. Well, on the side-panel, anyway. Montjuïc was a motor racing circuit in Barcelona. Which told you most of what you needed to know about the bike. Conceptually, it modelled the 'Formula' flyers Laverda built for their single-make race series.

Unfortunately, that race-based concept was not entirely realised in the roadster. Certainly, Laverda had achieved substantial success at Montjuïc. And - in handling terms, at least - the Mk2 came acceptably close to replicating the agility of the track tools. That was largely thanks to the bike's light weight, sturdy tubular-steel frame, and Marzocchi suspension. Likewise, Brembo disc brakes recalled the race bikes' sixpence-stopping precision. And a high-speed weave - which had plagued the Montjuïc Mk1 - had been seen off by the Mk2's frame-mounted fairing.

No, it was the new bike's speed - or lack of it - which ultimately took the edge off its razor-sharp manoeuvrability. Flat out, the needle hovered around the 110mph mark. While that was adequate, it hardly set the world alight. Though the exhilarating exhaust note did what it could to redress the balance. To be fair, that was from a mere 497cc parallel twin motor. Even so - on paper - the Montjuïc had plenty going for it, in the performance stakes. For sure, a 'racer's crouch' riding position signalled straight-line intent. As did its 'tuned' engine - fed by air-filterless carburettors. The Montjuïc's high price tag, too, seemed to promise lots of whizz for your lire. A relative lack of power, though, was offset by other virtues. It looked lovely in the way that only a Laverda can. And the lines it carved through corners would have graced a maturing Michelangelo. Just that pesky top speed stat let the Laverda side down a tad. Apart from that, the Montjuïc Mk2 made motorcycling hay in the Spanish sunshine. Before heading back to Breganze!