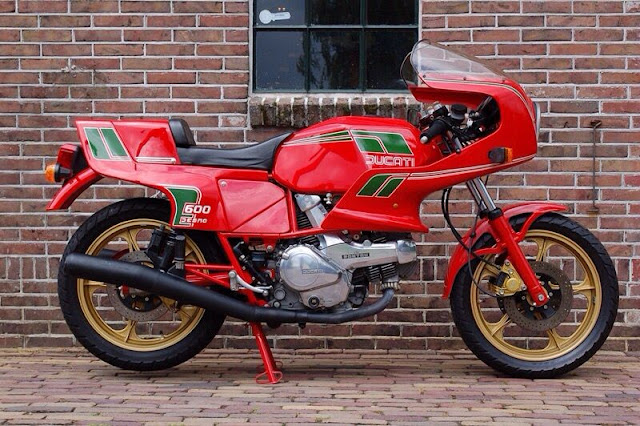 The Ducati Pantah was available in both 500 and 600cc forms. It was a technical stepping-stone for the Bologna marque. The 500 was launched in '79. The 600 appeared in '81. They would be an important blueprint for future development. As such, they ushered in more prosperous times for Ducati. When they were released, the firm was a little down at heel, financially.

Not that you had have known it by looking at the bikes. Fabio Taglioni made certain of that. One of the most esteemed engineers in motorcycle history, he had worked on the Ducati 500 V-twin GP bike. That was at the start of the Seventies. The machine's claim to fame was its toothed overhead cam belts. Taglioni now re-visited them - inserting appropriately detuned versions into the cylinder heads of the new Pantahs. They were smooth, reliable - and easy on the ear. Rightly, they allowed the V-twin exhaust set-up to assume aural centre stage. The rubber belts were cheap to manufacture, too. That was a boon to Ducati - who were keen to keep the price of the new bikes as competitive as possible.

Taglioni's delicate touch reached other areas, too. The Pantah's tubular steel trellis frame - and sensitive suspension - synced up to deliver steady as a rock handling. Its brakes came out of the top drawer, too. Brembo and Marzocchi had been sourced for the second to none cycle parts. Power output was impressive - without being awe-inspiring. The 600 made 58bhp - up from the 500's 52. However, those modest stats were aided by light weight. 415lb was all the 600 was shifting. As a result, 120mph was only just out of reach. And the shortfall was more than made up by the way it got to that speed. Surging acceleration had long been a Ducati hallmark. When the engineering excellence was aligned with typically Italianate styling, the Pantahs were on a sure road to success. A curvaceous half-fairing - and racy removable seat - lent poise and purpose to both front and rear ends. Ducati's dynamic duo had done their work well. In the wake of the Pantahs - both 500 and 600 - the firm was set fair to weather future economic squalls.